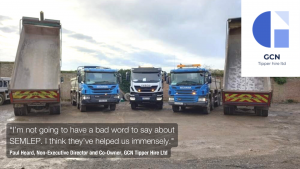 GCN Tipper Hire was founded by Gary Niblett in 2017, inspired by the opportunity to work on the HS2 rail project. In 2021 he was joined as co-owner by Paul Heard, and the company became GCN Tipper Hire Ltd. Business was going really well, and they were looking to expand their operation and employ more people when Covid struck, forcing them to delay their plans.

GCN Tipper Hire had always had an aspiration to grow rapidly to fulfill the demands of the HS2 project, but the pandemic affected the aggregates sector severely; large numbers of drivers and handlers were off sick and national shutdowns were affecting the supply chain. This didn’t change the fact that HS2 was still a major undertaking, and Phase 1 has to be completed, but there was a limitation on what GCN could do, and this meant putting their aspirations on hold.

For a while, they held fire, stood their ground and simply worked on surviving. Then, when the lockdowns ended, they spent some time thinking about what they could do to start growing their business again and make it more resilient for the future. Their customer was also increasing demand and asking them to grow, and so they started looking for ways to accomplish this.

The aggregates business is very capital-intensive; capital assets are extremely expensive, making it difficult for a small company like GCN to grow. Initially, Paul contacted the Northamptonshire Chamber of Commerce. He explained the situation, and asked if they had any advice. They suggested that he get in touch with the South East Midlands Local Enterprise Partnership (SEMLEP).

Taking their advice, Paul reached out to SEMLEP and spoke to Carl Mayers, one of SEMLEP’s Growth Hub Business Advisers. Paul explained what the company’s current position was, and where they wanted to be in the future. In response, Carl suggested that GCN Tipper Hire apply for a Recovery and Resilience Grant. These are funded by the Government’s Getting Building Fund, and designed to help companies that have been affected by the pandemic to recover and return to growth.

“I found Carl to be a very, very knowledgeable guy; he really gave us the right information to think about things in a structured way, and put our project plan and proposal together. He also gave us some advice for the future, and how to grow our business, transitioning from a small business into an SME.”

They talked through GCN’s situation and the criteria for receiving a grant, and there seemed to be a close match. On the basis of this conversation, Paul submitted an application, and was told that he had been successful.

“From a processing standpoint, going from the point where the grant had been awarded to processing the payment, looking for the assets and getting the payments onboard has been extremely efficient. The process of electronically signing the paperwork was very easy, and then talking to the grants office with Ron Yellon (SEMLEP’s Grants Officer) was great, and the whole process was very, very easy and simple, and took all the pain away from me.”

The grant that GCN received had a significant impact. Their business had initially been based around a single truck serving their main client, HS2. Two years ago, they had expanded their operations with a second truck, and more recently purchased a third. However, their customer was asking them to expand even further to five trucks, but having bought the third they lacked the capital to do this.

The aggregates industry is tough, and they’ve had to move quickly to remain competitive. The Recovery and Resilience Grant provided the cash injection that they needed to buy another two vehicles by providing 50% of the money required. Since Christmas 2021, GCN have already bought their fourth truck, and have just received their fifth. On the strength of this they’ve also been able to make two job offers.

The transformation from where the company was before, in lockdown and with only three vehicles, to where they are now is profound. GCN Tipper Hire is going from strength to strength, and Paul really appreciates the help he received.

“I’m not going to have a bad word to say about SEMLEP. I think they’ve helped us immensely; they made the whole process very clear and concise and simple, which is what we want as a small business. We don’t want loads of red tape; we don’t want things overcomplicated because it just distracts us from the targets we’re trying to achieve. Having that from you guys has been fantastic.”