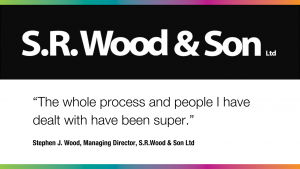 Luton-based S.R.Wood & Son has been leading in the commercial property market for decades. Founded in 1981, this family-owned-and-operated real estate company supports the disposal and acquisition of commercial property for a diverse network of clients. Managing high-value portfolios that run into the multi-millions, they are highly trusted commercial property experts, overseeing assets from North London to Bedford and along the A1/M1 corridors.

What challenge did S.R.Wood & Son face?

In recent years, the company has grown its presence on social media, increasing online visibility. Managing Director Stephen J. Wood was keen to build on this growth by developing the organisation’s YouTube channel. For the past several years, he had been thinking about a video series but lacked the equipment to move forward:

“I’ve had an idea for a video series for several years, but I’ve never really got it off the ground. I was a bit out of my depth. I had the contacts, I had the right knowledge, but I certainly didn’t have the right equipment.”

The video series would see Stephen interview entrepreneurs and start-up leaders about their unique journeys in commercial property investment and beyond, uncovering why and how they did what they did to understand the secrets of their success. The video content would be inspirational and informative while helping to promote S.R.Wood & Son and forging connections with potential clients.

How did SEMLEP provide support?

Stephen had partnered with SEMLEP in the past, having previously received funding for a website rebuild, so he was aware of the targeted business support they provide. After downloading a form, he was quickly able to apply for funding and was impressed with the simplicity of the process:

“The people I’ve spoken with couldn’t have been easier to communicate with. Very swift. Very simple. Straightforward. No problems.”

Following a successful application to the Government-funded Additional Restrictions Grant (ARG) scheme, S.R.Wood & Son received over £2000 through SEMLEP. This funding was used to purchase the equipment they need to make their ambitious video series a reality, and the first interviews are set to take place soon. Stephen says he would recommend SEMLEP support to other businesses across the area, adding that it’s helped them to “kickstart” a project he has “had in mind for years”.

We’re looking forward to seeing the video series come to life; it promises to be a fascinating watch!