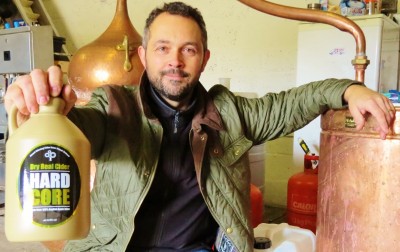 CASE STUDY: Cider producer in Milton Keynes given chance to grow thanks to Velocity

When you think of Milton Keynes you may think of concrete cows, roundabouts and a shopping centre, but it’s unlikely that cider is at the forefront of your mind.

All that could now be about to change, following the emergence of an award-winning drinks firm which has benefitted from a Velocity Business Support grant.

Virtual Orchard, a cidery and distillery on the banks of the Grand Union canal in Old Wolverton, has received national acclaim for the quality of its products.

Owner Laurence Conisbee started making cider as a hobby in 2009, using apples from his own garden. He set out with the intention of making 300 litres but soon found himself with three times that amount, selling it at local beer festivals.

In May 2011 he was asked to supply a major festival in Reading and was crowned Champion Cider of Great Britain. This led to an offer from a major pub and restaurant chain but as a small company he was unable to meet demand.

The following year, Laurence left his job in IT to go full-time with Virtual Orchard, giving him the catalyst he needed to take the business to the next level.

Production was scaled up and a regular supply of apples was sourced from an orchard in Nether Heyford. The range of products expanded, with apple brandy and apple juice both introduced to an appreciative public.

Mr Conisbee said: “At this point I was acutely aware of the need to grow and the easiest way to do this was to get my own still.

“I applied for a grant to help with this through Velocity and I was amazed at how easy and efficient the whole process was. Within a few weeks the still had arrived and we were able to get products to market in time for Christmas.

“I can’t thank Velocity and my adviser Emmanuelle enough for their help and support. I’ve named the still ‘Velocity’ to show my gratitude!’

With the still now in place, Virtual Orchard has the capacity to produce even more drinks and experiments are now taking place which could see milk vodka, smoked vodka and whiskey added to the range.

Velocity Business Support and its qualified and experienced Business Advisers are available to help businesses in a number of ways, through one-to-one support, grants and free business workshops.

Our Advisers are widely connected to national and regional government organisations as well as the private sector, and are able to signpost businesses to sources of grant funding or make personal introductions to individuals or organisations that add value to businesses.

To find out more about how Velocity could help you, call 0300 01234 35, visit www.VelocityBusinessSupport.com or follow us on Twitter @VelocityGrowth.