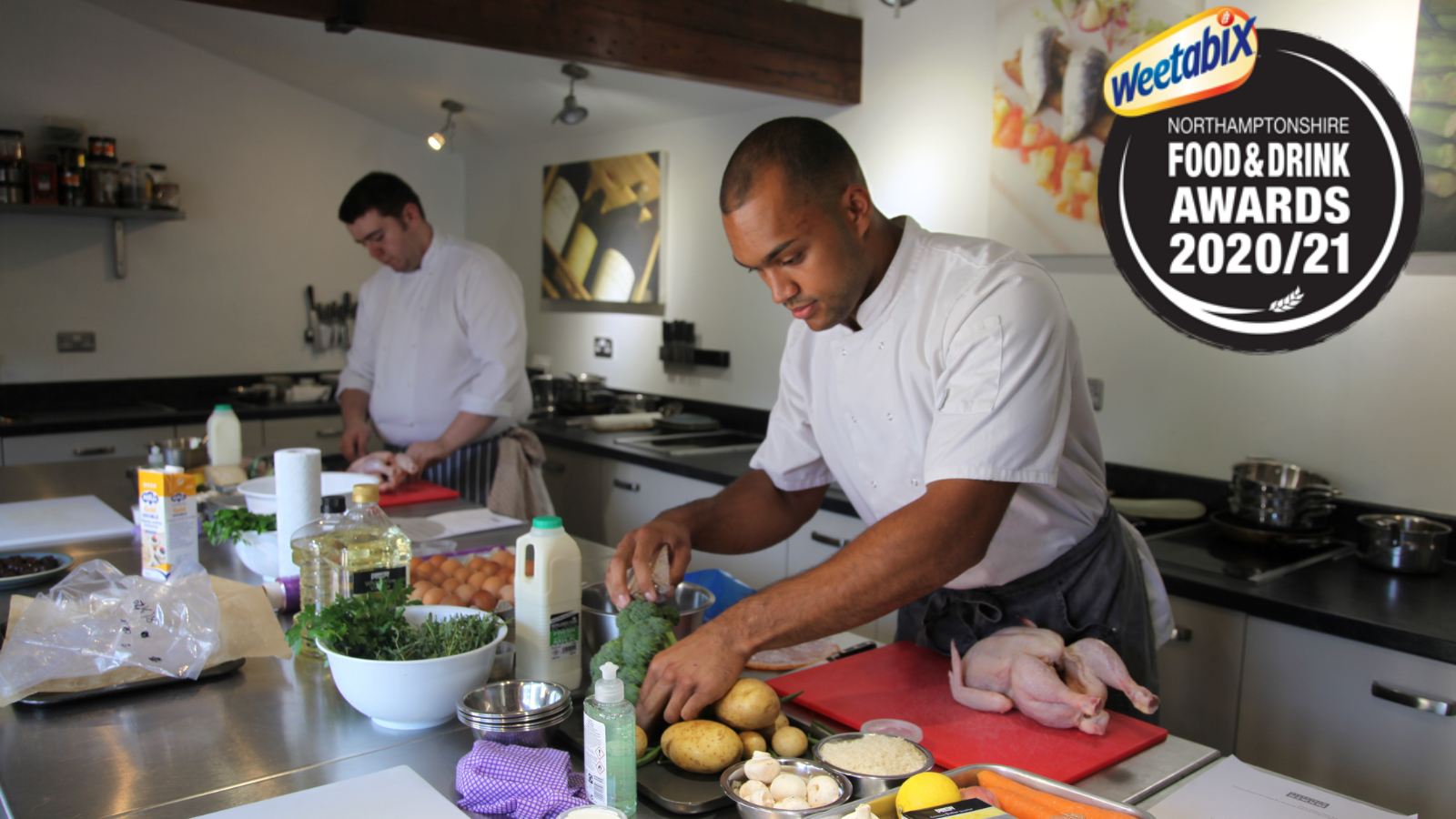 The oven gloves are off!

The county’s chefs may be facing the toughest of professional adversities thrown at them by the ongoing COVID crisis, but some of them have put that battle aside for a day and instead taken on a different challenge, vying for one of two prestigious titles in this year’s Weetabix Northamptonshire Food and Drink Awards.

So it was that, last week, four of the most talented local culinary craftsmen donned their whites and headed for Shires Cookery School in East Haddon to compete to be named ‘Chef of the Year’ (sponsored by Dawn Farms) at a cook-off which saw them given two hours to prepare and serve two identical portions of a starter and a main course using their key ingredients of locally sourced wild rabbit, damsons, homegrown artichokes and red wine from Earls Barton’s New Lodge Vineyard.

The four aiming for the top prize were (in alphabetical order):

The carefully socially-distanced event saw the quartet square up in two pairs across the day but watched throughout by the same panel of expert judges including the chef who fed the England Lionesses on their way to semi-final glory in the Women’s World Cup last summer, Gavin Austin, former Northampton College student Simon Dyer, who now works as Sir Richard Branson’s private chef on his Caribbean retreat, Necker Island, and former Saints and England Saxons player, Christian Day, who himself made the semi-final of BBC MasterChef earlier this year.

Indeed it was that TV experience that led Christian to be further impressed by the talent shown by all the finalists: “I was watched by thousands of people during my rugby playing career but I now know only too well that it’s quite a different thing being presented with an unknown culinary challenge in an unfamiliar kitchen and scrutinized every step of the way, so I was so impressed to see these guys in action and to watch them create some amazing dishes” said, Christian.

“All four of them showed real skill, confidence and passion in crafting their two courses and I hope I can speak on behalf of the panel when I say that they made the tasting session an incredibly enjoyable experience and the judging an equally tough one!” he added.

A week earlier, the same venue played host to the junior equivalent as four chefs fought for the title of

‘Booker Young Chef of the Year’, the category sponsored by Booker which is aimed at budding stars aged under 25.

The quartet was (in alphabetical order):

Their ‘Ready Steady Cook’ style challenge – again staged across morning and afternoon sessions to ensure social distancing – was to prepare their own version of Chicken Cordon Bleu using locally-sourced ingredients of ham from Sauls of Spratton, cheese from Hamm Tun Fine Foods and breadcrumbs created using a loaf from Whittlebury Bakery and, as with their senior counterparts, with no prior knowledge of the challenge ahead.

Among those charged with the task of determining who would be awarded gold, silver or bronze – a change to the usual winner and runner-up process which will apply to all categories for this year only – were Shires Cookery School owner and generous host James Claydon, Awards Patron Mary Laing, Head of Catering at Northampton College, Phil Martin, and Peter Saunders from category sponsor Booker, who spoke of the company’s pride in supporting the competition again, especially in these challenging times: “Booker has backed these Awards for a decade now and we’re particularly proud to be doing so again this year at a time when chefs, venues, producers and indeed the entire sector needs every boost it can get” said Peter.

“Watching the four accomplished young chefs in action was not only inspiring for all the judges but was a reassuring reminder that, however tough things may be at the moment, the future of food and drink in the county is in very safe hands” he enthused.

The results of the competition will be announced as part of a virtual online Awards celebration taking place on Thursday 12th November.

For more information on the dozen categories in the Weetabix Northamptonshire Food and Drink Awards 2020/21, please visit the Awards’ website at www.northamptonshirefoodanddrink.co.uk or call Rachel Mallows on 01933 664437 or email [email protected]

Meanwhile you can also follow the Awards, including news of the finalists in all of the categories as they are announced, on Facebook at @foodawards or Twitter and Instagram at @foodawardsHQ or on LinkedIn at @weetabixnfadawards

For further details on the wide range of courses on offer at Shires Cookery School, please visit www.shirescookeryschool.com or call 07801 572758.